THE WEEK ON WALL STREET

Investors reacted to two major news items last week, one far more of a surprise than the other. The Federal Reserve did indeed make a rate cut, matching Wall Street expectations. Drone strikes on two of the world’s largest oil fields brought a shock to the global oil market.

At Friday’s closing bell, stocks wound up with weekly losses after news broke that Chinese trade officials were heading home from the U.S. sooner than planned. The S&P 500 retreated 0.51% week-over-week; the Dow Jones Industrial Average lost 1.05%, and the Nasdaq Composite dipped 0.72%. In developed foreign markets, shares tracked by the MSCI EAFE index fell 0.31%.1,2,3

While traders looked for signs of future guidance on monetary policy, little emerged from the latest Fed policy statement and Fed chair Jerome Powell’s subsequent press conference. The updated dot-plot forecast showed that seven Fed officials anticipated at least one more cut before 2020, while ten did not.4

As last week began, crude oil futures spiked in response to an attack that interrupted roughly 5% of the world’s oil production. The value of West Texas Intermediate crude, the U.S. benchmark, spiked 14.7% in a day, starting at $8.05 and reaching $62.90 by Monday’s close.

So, what day last week saw the biggest loss or gain for stocks? Not Monday, when the market absorbed news of the Saudi oil field strike. Not Wednesday, when the Fed rate cut occurred. Instead, it was Friday, when the S&P 500 lost only 0.49%. It just goes to show that stocks may ride through seemingly market-moving events with little daily change.7

If you are 50 or older, remember that you can take advantage of catch-up contributions in your retirement accounts. Under the current catch-up rules, set by the Internal Revenue Service, you can contribute an extra $1,000 to a Roth or traditional IRA and an extra $6,000 to the typical workplace retirement plan.

THE WEEK AHEAD: KEY ECONOMIC DATA

The Econoday economic calendar lists upcoming U.S. economic data releases (including key economic indicators), Federal Reserve policy meetings, and speaking engagements of Federal Reserve officials. The content is developed from sources believed to be providing accurate information. The forecasts or forward-looking statements are based on assumptions and may not materialize. The forecasts also are subject to revision.

THE WEEK AHEAD: COMPANIES REPORTING EARNINGS

Companies mentioned are for informational purposes only. It should not be considered a solicitation for the purchase or sale of the securities. Any investment should be consistent with your objectives, time frame, and risk tolerance. The return and principal value of investments will fluctuate as market conditions change. When sold, investments may be worth more or less than their original cost. Companies may reschedule when they report earnings without notice.

“The strongest natures, when they are influenced, submit the most unreservedly; it is perhaps a sign of their strength.” 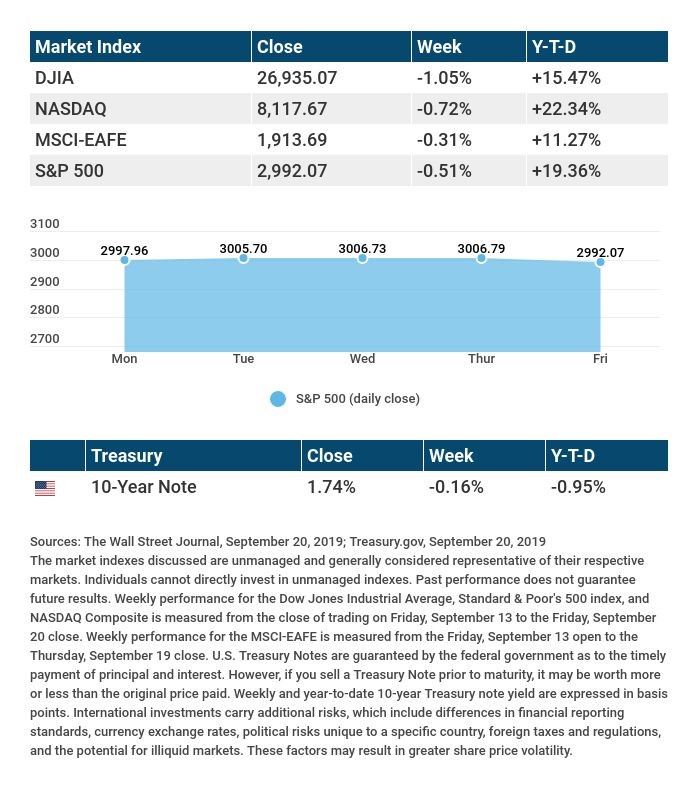 Up and down the stairs it goes, without moving any toes. It is found upstairs, downstairs, even in the hall; alas, it cannot move at all. What is it?

LAST WEEK’S RIDDLE: What has hundreds or thousands of ears, but can’t hear a thing?

ANSWER: A corn field, as it is full of ears of corn.

This material was prepared by MarketingPro, Inc., and does not necessarily represent the views of the presenting party, nor their affiliates. The information herein has been derived from sources believed to be accurate. Please note – investing involves risk, and past performance is no guarantee of future results. Investments will fluctuate and when redeemed may be worth more or less than when originally invested. This information should not be construed as investment, tax or legal advice and may not be relied on for the purpose of avoiding any Federal tax penalty. This is neither a solicitation nor recommendation to purchase or sell any investment or insurance product or service, and should not be relied upon as such. All market indices discussed are unmanaged and are not illustrative of any particular investment. Indices do not incur management fees, costs and expenses, and cannot be invested into directly. All economic and performance data is historical and not indicative of future results. The Dow Jones Industrial Average is a price-weighted index of 30 actively traded blue-chip stocks. The NASDAQ Composite Index is a market-weighted index of all over-the-counter common stocks traded on the National Association of Securities Dealers Automated Quotation System. The Standard & Poor’s 500 (S&P 500) is a market-cap weighted index composed of the common stocks of 500 leading companies in leading industries of the U.S. economy. NYSE Group, Inc. (NYSE:NYX) operates two securities exchanges: the New York Stock Exchange (the “NYSE”) and NYSE Arca (formerly known as the Archipelago Exchange, or ArcaEx®, and the Pacific Exchange). NYSE Group is a leading provider of securities listing, trading and market data products and services. The New York Mercantile Exchange, Inc. (NYMEX) is the world’s largest physical commodity futures exchange and the preeminent trading forum for energy and precious metals, with trading conducted through two divisions – the NYMEX Division, home to the energy, platinum, and palladium markets, and the COMEX Division, on which all other metals trade. Additional risks are associated with international investing, such as currency fluctuations, political and economic instability and differences in accounting standards. This material represents an assessment of the market environment at a specific point in time and is not intended to be a forecast of future events, or a guarantee of future results. MarketingPro, Inc. is not affiliated with any person or firm that may be providing this information to you. The publisher is not engaged in rendering legal, accounting or other professional services. If assistance is needed, the reader is advised to engage the services of a competent professional.